knoten n+1 is a media-/sound installation visualizing the mur.at network in Graz. 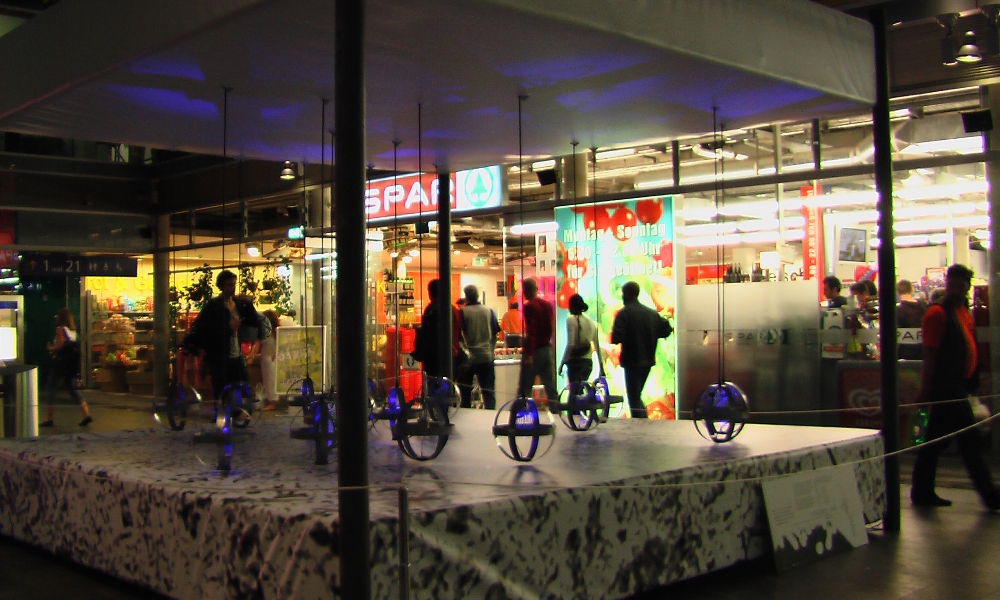 The 18 mur.at netnodes are represented by sound objects. These objects are placed in the installation analog to the allocation of the nodes in the city of Graz. The ovements of the objects can be controlled with spools in dependency of the network traffic of the different nodes.

If two objects are colliding, a sound-producing mechanism in the objects is being activated. The visitors can manipulate the sound by their position around the installation. Users of a special project web-interface can also determine the real-time sound-arrangement of the installation.

knoten n+1 ist the winning project of the net_sight contest, a NetWorkArt Competition, that has been initiated by mur.at. The project will be realized until May 2007 in Graz.
Within the potential overlay of informations from the net, about the net and at the place of the installation itself, movement and sound of the object do emerge. it is not comprehensible, in which individual space of mur.at the triggerdata is developing. That way the work abandons any kind of quantification as informationprovider. at the same time, "knoten n+1" does not exist without the specific mur.at network. Besides the so to say automatically generating data (networktraffic) and the intervention by visiting the installation, there is a further possibility in composing the object, which is to be realized using a web-interface.
(net_sight jury statement 1st price, 12/2006)