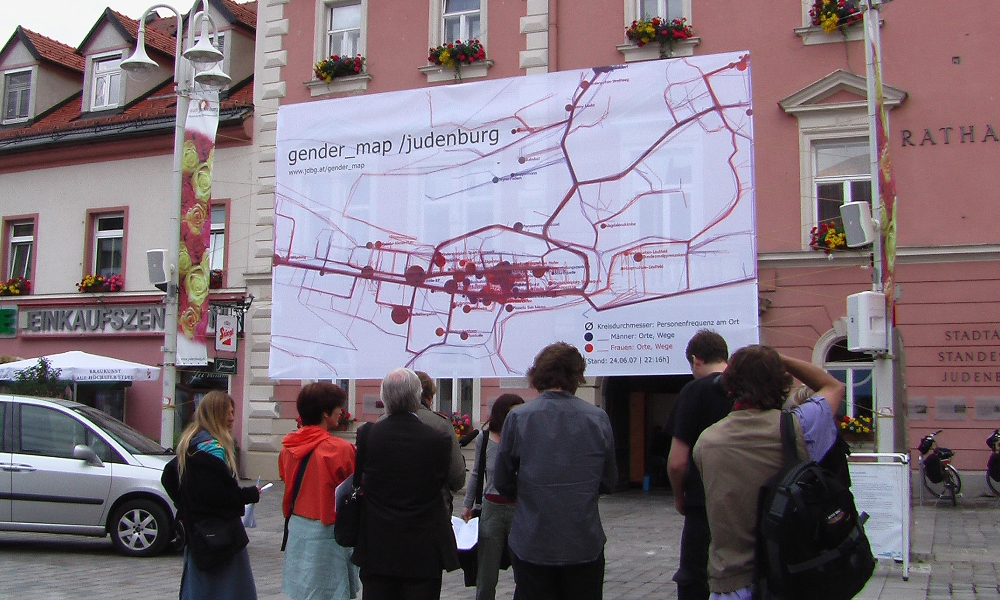 A dynamic city map of gender spaces in Judenburg.

The gender_map is embedded in the project gender_walk, which takes place in Judenburg as part of the media art festival Liquid Music. It is a city map generated by means of an empirical survey of the use of the city - a cartographic image of the city based on everyday paths and places of women and men in Judenburg. The dynamic gender_map has a data collection module and its own visualisation module that allows users to explore the use of Judenburg's urban space according to certain criteria via the WWW.

The data generated in the course of a survey of everyday paths and places of women and men in the city become visible in the gender_map as gender-structured spaces.

This structuring of urban spaces is at the same time a reflection of the different socialisation conditions of men and women. The appropriated physical spaces provide information about the position in social space. People who perform production and reproduction tasks have to link significantly more routes and places in their "overall everyday working life" than people with a "gainful employment only" everyday life. In this way, social structure manifests itself in urban space and reproduces gender difference. Spaces do not simply exist, spaces are constructed and highly influenced by the social reality of individuals.

The visualisation of everyday paths and places of men and women in the city of Judenburg is done by a software applet that is oriented towards density relations and thus creates deviations (images of difference) from the existing city map, a cartographic image of the gender-structured spaces of Judenburg.

The gender_map is, on the one hand, a printed work that, in combination with visual markers in real space, allows a walk through the city according to social gender aspects, and, on the other hand, a dynamic representation on the World Wide Web. In this form, the gender_map is open to new entries from city residents and functions as the centre of a forum open to further experiences and their exchange.